CRISPR/Cas is one of several genome editing techniques that can be used to specifically induce changes in the genome of plants. For years, there has been an intense debate as to whether the use of genome editing is a curse or a blessing for agriculture.

Some see genome editing as an important tool to solve the agricultural challenges caused by climate change and a growing world population. Critics, on the other hand, argue that the same promises have already been made in classical genetic engineering, but that to this day almost all commercial applications are tolerance to herbicides or resistance to insects.

In any case, it is undisputed that there has been a heightened interest in genome editing since the development of CRISPR/Cas in 2012. To date, genome editing has been used in more than 70 model, cultivated and ornamental plants, and well over 1000 applications of genome editing from over 35 countries have been published in scientific journals 1.

But what are the concrete results of this research? Can genome editing really be applied to contribute to a more sustainable agriculture? Are there even plants that produce direct health benefits for the consumer? And is it possible to use genome editing to grow plants that are better adapted to extreme weather events caused by climate change?

To help you find an answer to these questions, we have created something very special:

A CRISPR advent calendar filled with explanations of recent CRISPR applications, in which we take you on a trip around the world!

From December 1st onwards, we will present 24 examples of genome editing applications in 22 different plants, from eleven countries on five continents. In a few lines and in simple words, we will outline the challenges facing agriculture and the contributions of genome editing toward tackling them. We will also provide you with links for further background information and the original source of the publications.

The individual calendar contributions are attractively illustrated and are presented in German, English, Spanish, Italian, French, Dutch, Greek, Portuguese and Czech. We hope to provide you an interesting base for a better understanding of genome editing applications, and we are happy to discuss and answer your questions! Have fun reading!

This Advent calendar is a joint project of the members of the “Progressive Agrarwende” and the European Citizens’ Initiative Grow Scientific Progress.

Dominik Modrzejewski, translated by Martina Helmlinger
Studied agricultural sciences and agribusiness. Currently a PhD student at the Julius Kühn Institute (JKI) in Quedlinburg, working on a systematic literature review on applications of genome editing in agriculture and their risk assessment (“off-target effects”).


Johannes Kopton
Johannes is co-founder of the “Progressive Agrarwende”, studies cybernetics, is a member of the German Green Youth and the German Green Party. At the startup Plantix he is working on modelling the spread of plant diseases.

Daria Chrobok
Daria Chrobok holds a doctorate in plant physiology. Her scientific background coupled with her artistic skills led her to found DC SciArt. Her company’s portfolio includes the creation of scientific illustrations as well as comics and cartoons to present complex scientific concepts in an understandable way. Homepage: dcsciart.com, Twitter: @dariabidopsis

The Advent calendar is based on work carried out in the BMBF-funded ELSA-GEA project. The subproject “Evaluation of the influences of genome editing on plants” was carried out at the Julius Kühn Institute, at the Institute for the Safety of Biotechnological Processes in Plants. The project is focussed on a systematic search for international literature on genome editing applications in plants. The results of this work can be downloaded under the following barrier-free link: https://environmentalevidencejournal.biomedcentral.com/articles/10.1186/s13750-019-0171-5 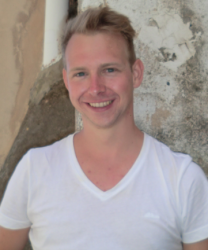